No choice but
to power down.

Read our message to our members below. 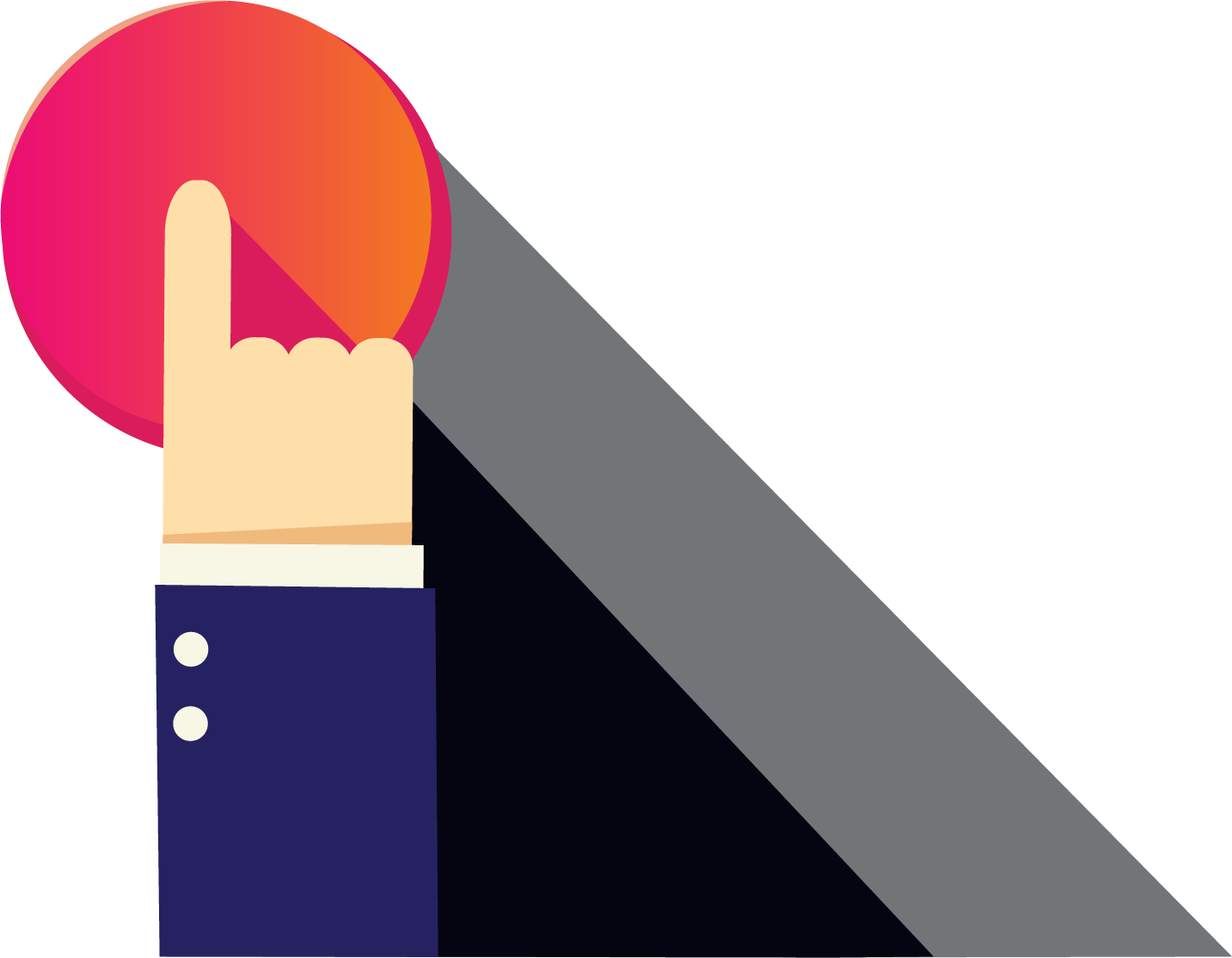 To Former Customers* of Griddy Energy:
Notice of Bankruptcy Filing

On March 15, 2021, Griddy Energy LLC (“Griddy”) filed for bankruptcy. The Judge in charge of the Case is the Honorable Marvin Isgur of the United States Bankruptcy Court for the Southern District of Texas. He has appointed Stretto.com as the Administrator who will send you important notices about the bankruptcy.

All future notices about Griddy’s bankruptcy and any rights you may have will be sent to you by email (or by text if Griddy has a valid phone number for you and does not have your correct email).

TO PROTECT ANY RIGHTS YOU MAY HAVE AS A FORMER CUSTOMER OF GRIDDY IT IS IMPORTANT THAT YOU OPEN AND READ ALL EMAILS, INCLUDING LINKS TO DOCUMENTS CONTAINED IN THE EMAILS SENT TO YOU FROM: “GRIDDY ENERGY on behalf of noreply@stretto.com.”

The Court has set July 19, 2021 at 5:00 p.m. (Central Time) as the last date for Former Customers* to assert claims against Griddy in the bankruptcy court. If you are a Former Customer and believe you have a claim against Griddy that arose before March 15, 2021, you must fill out and send in a proof of claim form according to instructions you will receive by email from “GRIDDY ENERGY on behalf of noreply@stretto.com." Failure to file a claim before the deadline may, pursuant to a future order of the Court, result in your claim being barred.

If you have questions or need to provide the Administrator with your updated and correct email address or phone number, please email: GriddyInquiries@stretto.com, or call toll-free: 855.478.2725.

You may also obtain information about Griddy’s bankruptcy at: https://cases.stretto.com/Griddy.

Griddy Energy LLC announced today, March 15, 2021, that it has filed a voluntary petition for relief under Chapter 11 of the U.S. Bankruptcy Code in the Southern District of Texas, together with a proposed plan of reorganization – a key feature of which is to give releases to former customers with unpaid electricity bills. Griddy sought court protection after financial devastation related to the actions of the Electric Reliability Council of Texas ("ERCOT") during and after Winter Storm Uri.

"Prior to Winter Storm Uri, Griddy was a thriving business with more than 29,000 customers who saved more than $17 million dollars since 2017. The actions of ERCOT destroyed our business and caused financial harm to our customers," said Griddy Chief Executive Officer Michael Fallquist. "Our bankruptcy plan, if confirmed, provides relief for our former customers who were unable to pay their electricity bills resulting from the unprecedented prices.  ERCOT made a bad situation worse for our customers by continuing to set prices at $9,000 per megawatt hour long after firm load shed instructions had stopped. Our customers paid 300 times more than the normal price for electricity during this period.

"Griddy did not profit from the winter storm crisis. Griddy provides customers access to real-time wholesale electricity prices, allowing them to monitor and adjust electricity usage. Griddy neither influences nor controls the price of electricity; prices are passed on to customers without mark-up. Griddy only earns the same $9.99 monthly membership fee regardless of the fluctuations in price of electricity.

Prior to the unprecedented market events that resulted in prices staying at $9,000 per megawatt hour for 87.5 hours, the real-time electricity price had only reached that level for a total of 3 hours since 2015.  Potomac Economics, the Independent Market Monitor, has now reported in a letter to the Public Utility Commission of Texas ("PUCT") that ERCOT's failure to remove the price cap in accordance with the intent of the PUCT price order was "inappropriate pricing intervention" that resulted in $16 billion in additional costs.

"We built Griddy to improve an antiquated industry by giving our customers access to wholesale pricing, real-time data and the ability to help balance the grid while lowering their own bills. Our model worked in August 2019 and would have worked in February 2021, had the grid not failed and the regulators not intervened," said co-founder, Gregory Craig. "No retail energy provider or consumer should have to forecast and protect against such extreme and unforeseeable circumstances.  We firmly believe in our model but, in order for it to be successful, the grid has to function properly, and prices have to be set by market forces.  The actions of ERCOT caused our customers to unnecessarily suffer and caused irreparable harm to our business."

Griddy filed routine motions to establish its ability to move the chapter 11 case forward expeditiously. As part of its first day relief, Griddy is seeking to establish a bar date for claims. Griddy also will be seeking approval of its proposed disclosure statement and confirmation of its chapter 11 plan of reorganization within 80 days from filing.

More information about Griddy's Chapter 11, including access to Court documents, will be available at https://cases.stretto.com/Griddy or contact Stretto, the Company's noticing and claims agent, at 855.478.2725 (toll-free) or 949.471.0997 (international).

‍Now that Griddy has filed for Chapter 11, what will happen to my account balance?
As a result of the actions taken by ERCOT during and after Winter Storm Uri, Griddy is facing financial challenges related to the electricity delivered to its customers during this period. Griddy is seeking Chapter 11 protection to efficiently wind down for the benefit of its creditors while balancing the desire to give its former customers relief from the uncertainty of being subject to collection actions as a result of the extreme wholesale electricity prices from the winter storm event.

Griddy expects to calculate your final account balance within 60 days from February 26, 2021 – the date when ERCOT commenced transitioning our customers to the Provider of Last Resort (POLR).

Under our bankruptcy proposed plan, which is subject to Bankruptcy Court approval, a key feature is to exchange releases with former customers, including those with unpaid electricity bills. Griddy will be seeking court authority to set a timeline in connection with the solicitation of votes on its plan. The final customer account balances are solely for informational purposes at this point. The proposed chapter 11 plan provides customers the option to get releases from their unpaid electricity bills in exchange for releases of the Company and certain other parties. If the Bankruptcy Court ultimately confirms the chapter 11 plan and approves the proposed customer releases, the Company will release those participating customers (i.e., those that vote in favor of the plan or abstain from voting) from their obligations to the Company. As of today, the Bankruptcy Court has not yet approved the Company’s proposed disclosure statement or plan.

More information about Griddy's Chapter 11, including access to Court documents, will be available at https://cases.stretto.com/Griddy or contact Stretto, the Company's noticing and claims agent, at 855.478.2725 (toll-free) or 949.471.0997 (international).

What do I have to do?
You do not have to do anything. ERCOT has already automatically switched you over to a new REP designated as a POLR.
‍
You will also receive notice from the POLR who will assume the responsibility of providing you service.  The POLR will assume service for you as of February 26, 2021. You can leave the POLR’s assigned service by choosing a competitive product or service offered by the POLR, or another competitiveREP.  If you would like to see offers from different REPs, please access www.powertochoose.org, or call toll free 1-866-PWR-4-TEX (1-866-797-4839) for a list of providers in your area.  After you have transitioned to the POLR, you may accelerate a switch to another REP by requesting a special or out-of-cycle meter read.

‍Will I lose power?
No. You will not lose power. This transition will be seamless. You should not have any interruptions to your electricity service. Ifyou experience any outage, contact your new REP.

What does this mean for the future of retail electricity choice in Texas?
Many companies have already reported or will report massive losses due to the extreme circumstances last week. While Texas used to be able to boast hundreds of providers and thousands of plans, that freedom of choice could drop to a handful of the traditional, big players. Texas was a trailblazer in deregulation, but it seems we might be going back to the giant monopolies dictating the rules.

How can I speak up for Griddy and to be sure Texas allows wholesale electricity plans?
If you think this loss of choice and innovation is harmful to the future of energy, let your voice be heard. This doesn’t just affect Griddy and our members. It can have lasting impact for years to come. Email or call the PUCT or your local representatives and demand that they create a fair marketplace for innovation and choice.

PUCT info:
512-936-7120 or customer@puc.texas.gov
Go here if you want even more people to contact: https://www.puc.texas.gov/agency/about/contact/DepartmentSearch.aspx

Look up your representative: https://myreps.datamade.us/

Here's to our amazing members

Here’s to the future. Here’s to you.

To our members:  A company couldn't ask for more amazing members. We set out to spark a community and get people excited about energy – and y’all didn’t disappoint. Even during this insanity, so many of you have supported and defended Griddy and our shared vision. Our model plays a critical part in the future of sustainable energy. It’s better for the consumer and better for the grid. But it seems we’ll have to wait a bit longer.

Until then –
Here’s to building a technology and community that believes in energy empowerment and transparency.
Here’s to renewable energy that gives us better electricity and technology for the future.
Here’s to a distributed grid that results in a breakdown of archaic power structures.
Here’s to expanded demand response where your behavior has a huge impact.
Here’s to fun.
Here’s to delight.
Here’s to you.

Some Griddy love – from our members 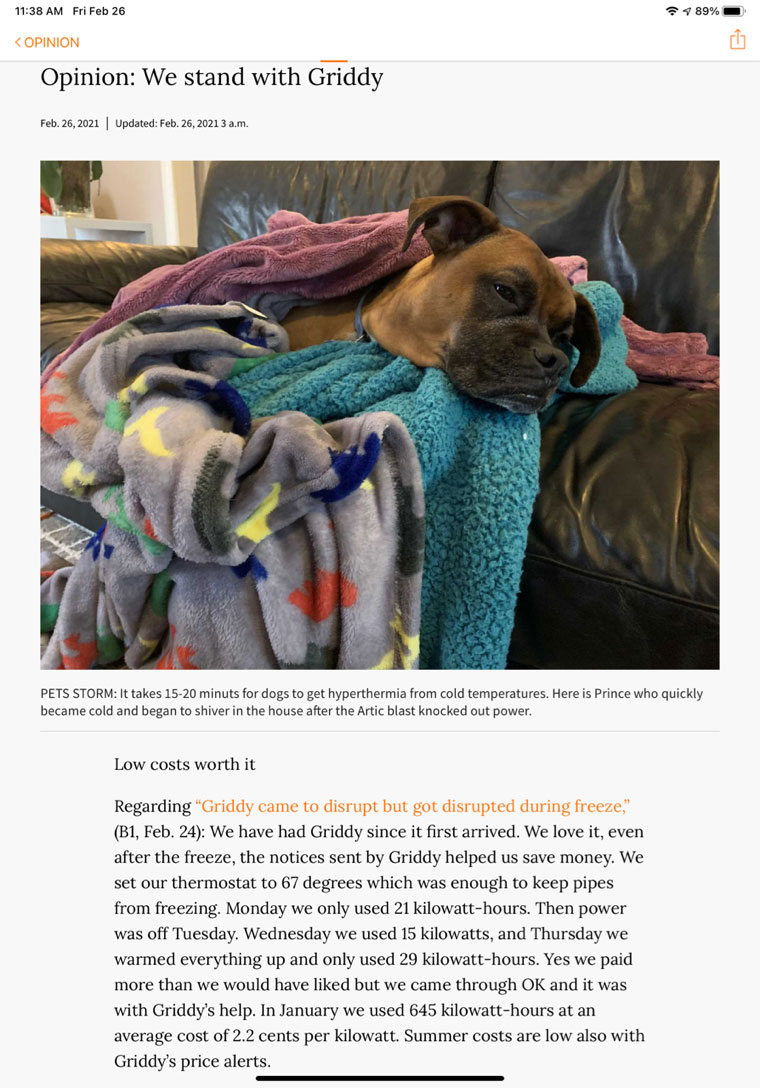 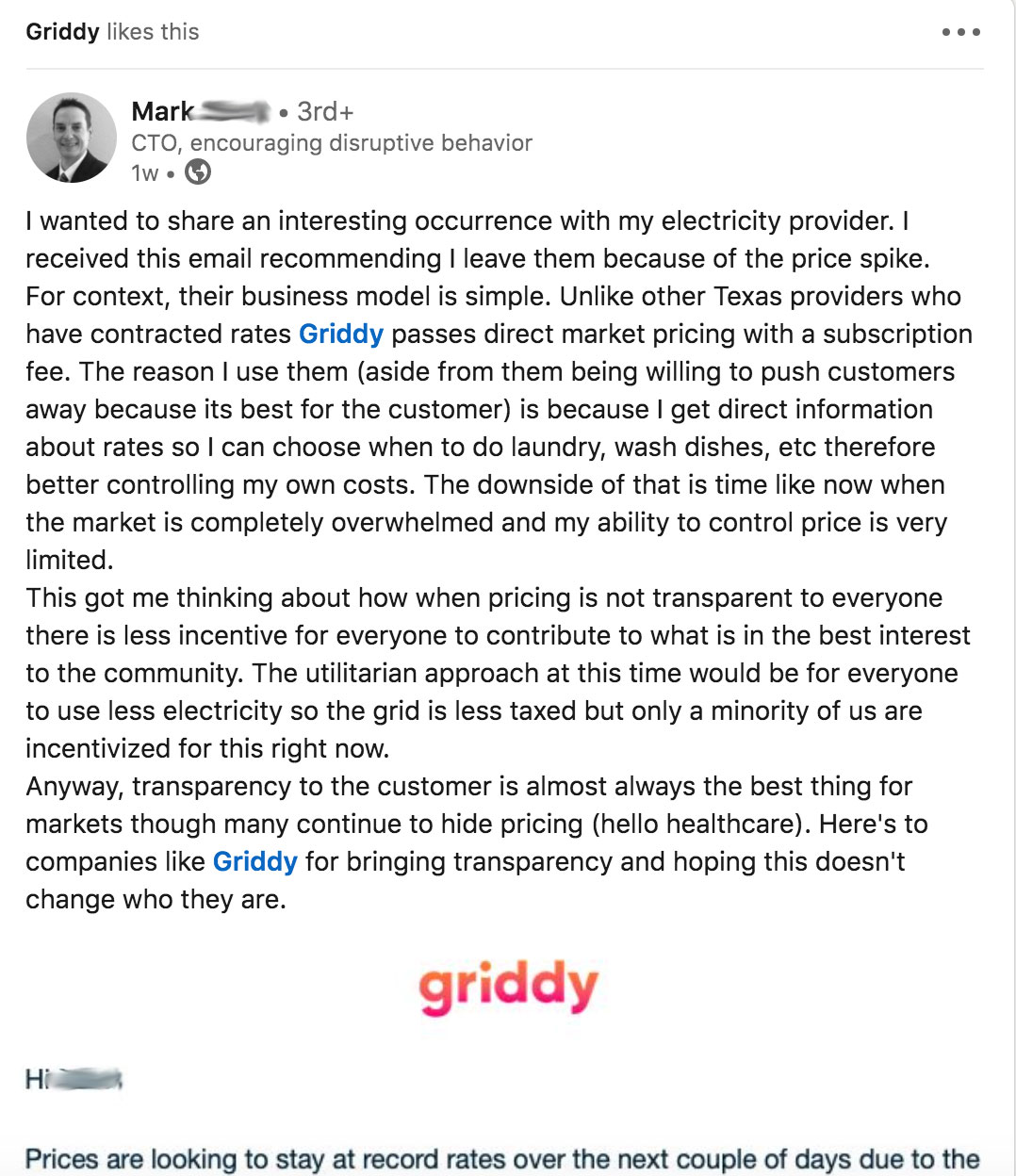 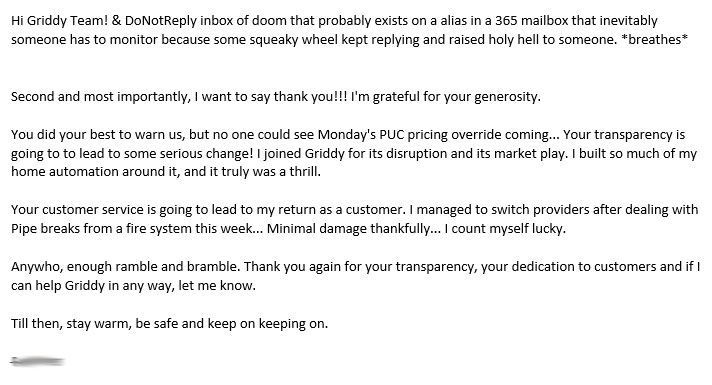 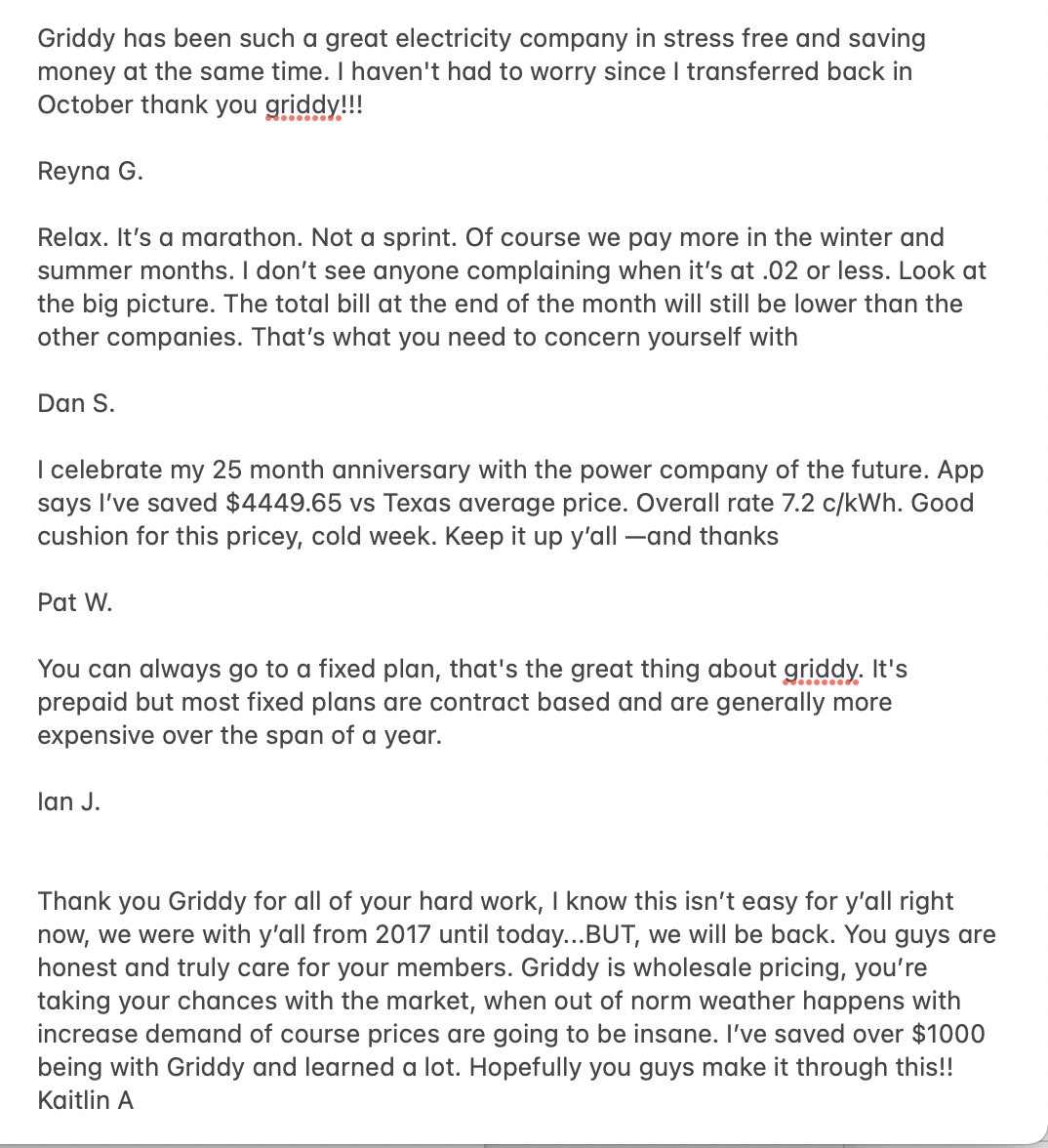 Here's what our members are saying

I track my power usage and payments compulsively, and there's nothing cheaper, more transparent, or easier to use out there than Griddy. I'm still actively shopping for cheaper plans, and they simply don't exist. You're making your competition look foolish at tbest and intentionally disnhonest at worst. Keep up the awesome work.

So when my last electricity contract ended, I decided to try something new and signed up with @GoGriddy instead. It's early days still, but my last full month with my old provider was around $250. So far this month, I'm #OnPace to rack up about $100. I'd call that a win.

I work for one of Griddy's competitors and I love this app and their service. So simple, elegant, and easy.