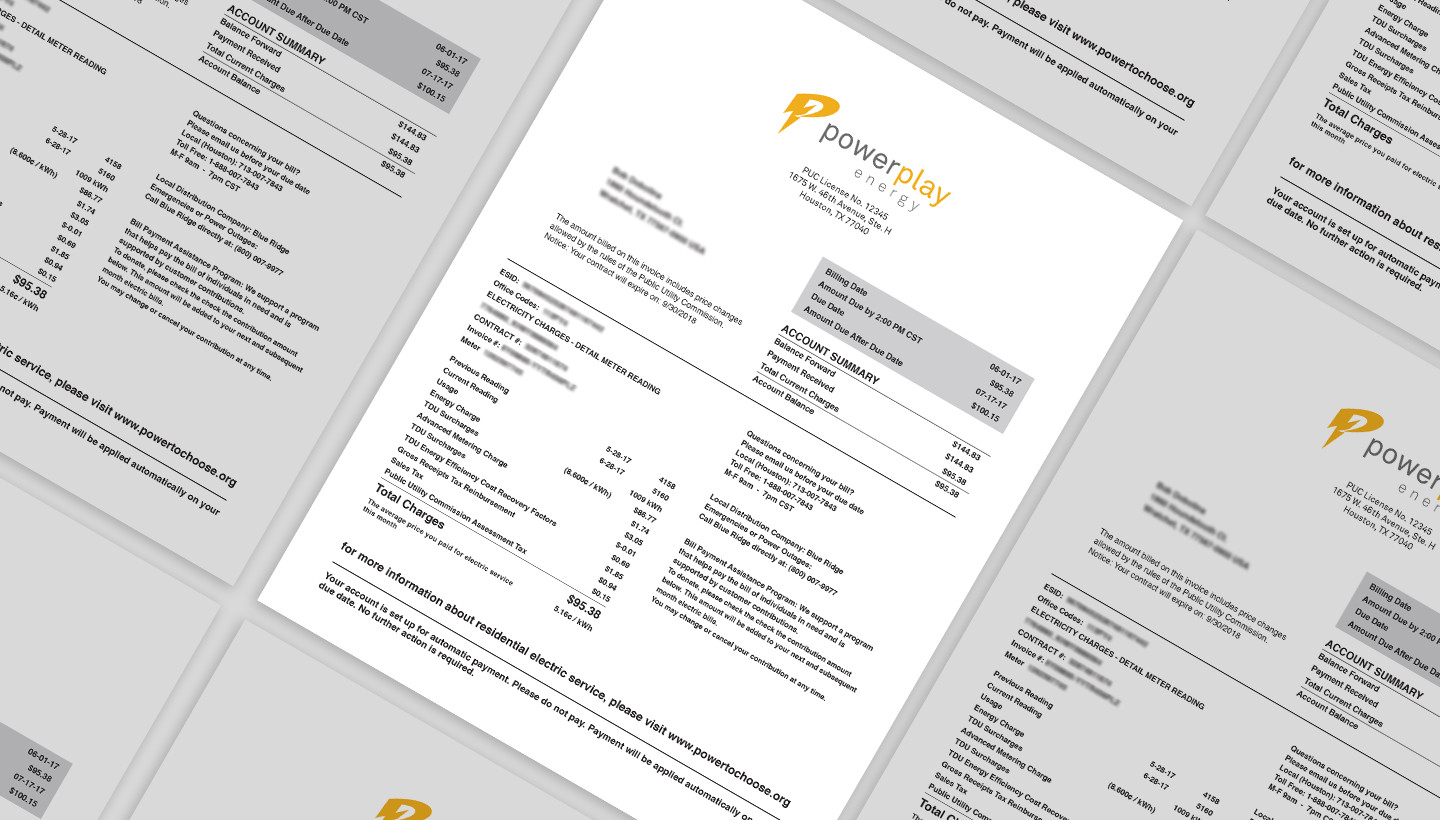 UsageThis part of your bill simply tells you how much electricity your household has used this month, measured in kilowatt hours (kWh). Base ChargeIf usage is measured in kWh, then it stands to reason that if you go on vacation and shut off all your lights and appliances, your usage charge should be zero. Not so fast! Nearly half of all the electricity plans listed on Powertochoose.org include a base charge fee, which means users must pay a minimum each month whether they’ve used any electricity or not.

Current Charges The current charges on your electricity bill include not just the total amount of all the electricity you’ve used, but also all applicable taxes and fees.

‍Energy Charge The energy charge is based solely on how many kWh you’ve consumed in a month before taxes and fees. Looking at the energy charge will tell you exactly how much of your monthly bill goes towards electricity vs. how much is going toward additional fees.

‍TDU Delivery Charge This charge covers the cost of transporting electricity from the power plant to your home. Most consumers don’t realize they are paying not just for the electricity itself, but for delivery of that electricity by a transmission and delivery utility (TDU) as well. However, some electricity providers hike up TDU charges, so it’s important to compare plans in order to avoid being taken for a ride on transportation fees. You also need to be on the lookout for any of the 100 plus one-time charges that can appear on your bill with very cryptic names like “System Hardening Tracker” or “Vegetation Management.” You should look for a REP that makes sense of these charges and talks about them in commonsense terms. Otherwise, how would you know “System Hardening Tracker” is basically just disaster preparedness?

‍Non-Recurring ChargesThese fees probably won’t be listed as “non-recurring charges” on your bill, but this term refers to all manner of hidden charges that electricity providers manage to sneak in. According to our research, of the 2,000 plans at Powertochoose.com:

Let’s talk about minimum usage fees for a second. Some providers penalize users for using less than a certain amount of electricity—that is, they actually punish people for conserving power! Many electricity consumers who live in one-bedroom or studio apartments, or who go on vacation for a couple weeks, may not meet the minimum usage threshold even without trying to conserve, according to the Houston Chronicle. The fact that many REPs charge for simply answering a customer care call or sending you a disconnection notice in the mail isn’t so great, either.

‍Amount Due This is the total amount you owe the electricity company each month. In addition to all monthly charges, it can also include balances owed from previous bills.

‍Changes in Rates According to the Public Utility Commission of Texas, a change in rate charge can refer to “Any change in the customer's rates or charges due to the variable rate feature of the Terms of Service contract.” The change in rate charge is often the reason your electricity bill is much higher than advertised. Most electricity providers tier their rates so that customers who use more electricity each month get a lower per-kWh rate. So a business using more than 2,000 kWh a month is only charged $0.08 per kWh, but an apartment in the lowest tier can expect to pay $0.11. While the difference seems small, it can lead to much higher monthly charges than anticipated if your electricity usage should drop to a lower-than-usual tier. Plus, providers usually advertise the prices for their highest electricity tier, which usually has the lowest prices per kWh, further adding to the confusion when your bill actually shows up.

‍Other Taxes and Fees These charges help electricity providers and TDUs recover the costs of complying with government regulations and improving grid infrastructure, among other important tasks. Unlike those sketchy “non-recurring charges,” these don’t vary too much from provider to provider. However, not all providers break these costs out separately on their bills—and we won’t either, because there are frankly a lot of them! But here is a sampling of a few such fees and why they exist:

Price to Compare Some bills include a so-called “price to compare,” which only calculates the electricity you use and the cost to transport it – not the taxes and fees. This is a common practice among electricity providers, but it’s pretty misleading. Because it eliminates taxes and fees from the calculation, the “price to compare” is actually much less than what you actually have to pay as an electricity customer. If, when you get your bill, the rate you calculate including all costs is higher than what you thought you’d signed up for... well, don’t say we didn’t warn you.You shouldn’t need a Rosetta Stone to understand your electricity bill, but unfortunately, some companies depend on confusing terms in order to hide outrageous fees. At Griddy, we believe consumers should be empowered to understand their electricity consumption. Our app lets users track exactly how much electricity they’re using in a given day for greater transparency and cheaper rates with no double talk or hidden fees. When it comes to electricity bills, simpler is definitely better. Oh, and we provide an all-in-rate that actually includes all taxes and fees up front, because we believe that you should know the whole truth about the rate you are actually paying.