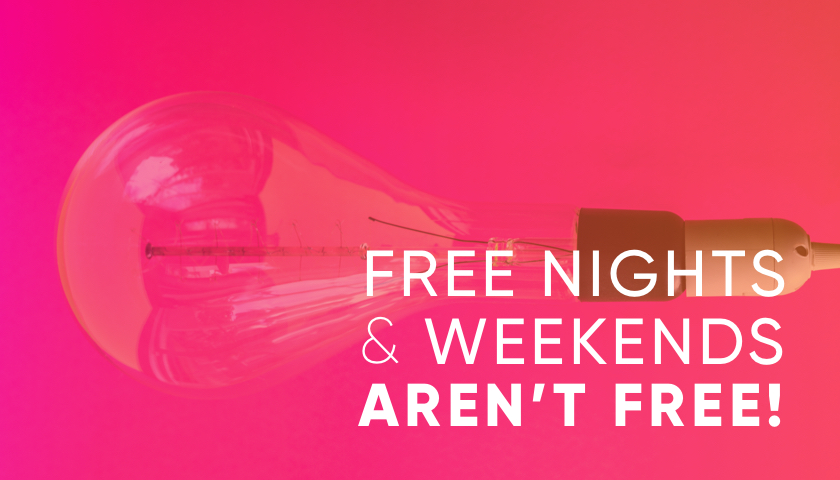 The world of electricity isn’t a stranger to the word “perk”. We get it, without them it would be impossible to sift through the millions of providers out there.

But, what you might not know is there’s a reason why we don’t give in to these kinds of gimmicks.

Rule of thumb: If it sounds too good to be true it probably is. And the biggest scheme in this industry is Free Nights and Weekends.

Those other guys know that the price of electricity is super cheap at night so they are willing to take the loss at those times knowing that you will be paying an extremely high rate all other times.

Here are 3 MYTHS about Free Nights and Weekends:

Even though free nights and weekend electricity plans show specific hours where your price per kilowatt hour are free, be careful! The truth is, if you do a comparison on your overall rate, the cost per kilowatt hour is much higher. So even though you don’t pay for electricity on weekends or nights, you’re paying for it the rest of the time...and then some!

The average rate you pay during non-night and weekend times is often over 20¢/kWh!

2. Free Nights and Weekends make sense for everyone.

Nights and weekends only account for 30% to 40% of the usage. Which means you are being up charged 60% to 70% of the time. And guess what? If you are someone who spends the majority of the time out of your home on weekends or goes to bed before 10:00 pm during the week, these types of plans won’t give you the true cost you are searching/hoping for.

The price per kilowatt hour on these plans actually stick you with a higher bill than pay-as-you-go electricity plans. Not only do they come with fewer savings than promised, but they also come with long contract periods and high cancelation charges to trap you into paying higher prices for a longer period of time. Why would they trap you if they knew it was a good deal? Again, the average rate you pay during non-night and weekend times is often over 20¢/kWh!

Let's look at some of the top 3 Free Nights and Weekend Plans out there:

Griddy was started because we’ve seen all of the dirty tricks, lack of innovation, and disregard from customers’ rights. When you’re a member of Griddy, we make an agreement to not just provide you with power but with good customer service and the guarantee that we won’t make anything more than the cost of membership off of you.

We pride ourselves in being 100% transparent. They don’t. We give you the wholesale price of electricity straight from the grid whereas they start at the same price but mark it up to make a profit and then lock you in so you can’t leave without paying them even more. We understand the idea of free nights and weekends sounds appealing, but their version of free nights and weekends isn’t free. You’re paying for it with higher than average rates during non-night and weekend times.